Lozenges are solid preparations that are intended to dissolve or disintegrate slowly in the mouth. They contain one or more medicaments usually in a flavored, sweetened base. Lozenges are most often used for localized effects in the mouth. They can also be used for systemic effect if the drug is well absorbed through the buccal lining or is swallowed. More traditional drugs used in this dosage form include phenol, sodium phenolate, benzocaine, and cetylpyridinium chloride. Newer drugs include analgesics, anesthetics, antiseptics, antimicrobials, antitussives, anti-nausants, and decongestants.

Lozenges have the advantage of:

One disadvantage of using a “gummy-type” lozenge with children is they may perceive it as candy and not a serious dosage form.

Lozenges can be made by molding or by compression. The name troche is applied to compressed lozenges. But in lay language, lozenge and troche are used interchangeably. Commercial lozenges are made by compression; they are harder than ordinary tablets so they will slowly dissolve or disintegrate. Compounded lozenges can be prepared by molding mixtures of ingredients containing:

Hard lozenges might be considered solid syrups of sugars. These dosage forms are made by heating sugars and other ingredients together and then pouring the mixture into a mold. The molds can shape the mixture to look like a sucker or a lollipop. The hard lozenge will not disintegrate in the mouth but will erode or dissolve over a 5 – 10 minutes period.

Hard lozenges are similar to hard candy. In fact, many hard lozenge formulas are modifications of hard candy formulas. The dosage form needs a low moisture content (0.5 – 1.5%) so water is evaporated off by boiling the sugar mixture during the compounding process. It is critical to follow all formulation instructions carefully and pay particular attention to temperatures; the success of forming the amorphous crystalline produce depends on it. For example, if a formula states that the syrup should not be stirred until a particular temperature is reached, or if it states that the temperature of the syrup must reach 145°C, follow these instructions precisely.

The primary disadvantage of hard lozenges is apparent. Heat labile drugs cannot be used in this formulation because of the high temperatures required for preparation. Another problem is that hard lozenges become grainy. The speed at which this happens depends on the sugar used and its concentration in the formulation. The best compromise seems to be 55 – 65% sucrose and about 35 – 45% corn syrup.

The final pH of the product should be considered. If acidic flavoring agents are to be used (citric, tartaric, fumaric acid), the final pH may be quite low (around 3). Hard candies have pHs around 5 to 6. So the pH of the hard lozenge will need to be raised to obtain this range. Calcium carbonate, sodium bicarbonate, and magnesium trisilicate can be added to the formulation for this purpose.

Soft lozenges are easily compounded and can be colored and flavored. They can either be chewed or allowed to slowly dissolve in the mouth. They are typically made of ingredients such as polyethylene glycol (PEG) 1000 or 1450, chocolate, or a sugar-acacia base. Because of their soft texture, these lozenges can be hand rolled and then cut into pieces which contain the correct amount of active ingredient. But a more convenient dispensing method is to pour the warm mass into a plastic troche mold.

Start the pour in the B2 position and then continue to fill all of the cavities in one pouring. PEGs contract as they cool so the cavities of the troche mold should be overfilled. Chocolate does not shrink as it cools so overfilling is not necessary. Before the material has solidified in the mold, use the edge of a spatula to level and even out the poured mass. Once the material has cooled in the troche mold, a warm spatula or light heating with a hot air blow dryer can give a smooth appearance.

Some soft lozenge formulations contain acacia and silica gel. Acacia is used to add texture and smoothness to the lozenge and silica gel is used as a suspending agent to keep materials from settling to the bottom of the mold cavity during the cooling process. Mixtures are typically heated to about 50°C during preparation so other ingredients such as sweeteners (i.e., sodium saccharin) should be heat stable.

Flavoring and sweetening soft lozenges to achieve a satisfactory taste will take some experimentation on the part of the pharmacist. Flavors can be obtained from sources such as food extracts, syrup flavor concentrates, or volatile oils. Sweeteners, either alone or in combination, will need to be added. A mixture of 9 parts Nutrasweet and 1 part saccharin might be a suitable starting point for developing a suitable sweetener.

Chewable lozenges are popular with the pediatric population since they are “gummy-type” lozenges. Most formulations are based on the glycerinated gelatin suppository formula which consists of glycerin, gelatin, and water. These lozenges are often highly fruit flavored and may have a slightly acidic taste to cover the acrid taste of the glycerin. Again, experimentation will be needed to achieve a satisfactory flavored and sweetened formulation. One alternative to the experimentation would be to buy “gummy-type” candy such as gummy worms or gummy bears, melt it with low heat until a fluid is obtained, and incorporate the drug, and then cool the mixture.

Lozenge molds must be calibrated just like any other mold (i.e., suppository, tablet triturates). The mold will need to be calibrated for each lozenge base. The reader should refer to those pages to review how to:

A “rule of thumb” is available about how much flavoring agent needs to be added to a lozenge. Prepare the lozenges without any drug present and flavor these blank lozenges to taste. Then when the drug is added to the formulation, start with about 5 to 10 times the amount of flavoring used in the blank lozenges. If the flavoring agent to be added is immiscible in the base, an “intermediate solvent” might be added to dissolve the flavoring agent and then incorporate the solvent into the base. A few drops of glycerin might be sufficient in a ratio of 1 part glycerin to 3 – 5 parts flavor.

If the lozenge is to be used to enhance buccal or sublingual absorption, then a gelatin soft lozenge would be a good base since it dissolves slower than the polyethylene glycol bases. More drug would be absorbed from the buccal cavity and less would be swallowed and lost in the GI tract. But the long contact time would limit gelatin’s usefulness if the drug is extremely bitter or if the taste is hard to mask. The polyethylene glycol bases are more palatable for the patient and should be used if buccal or sublingual absorption is not a therapeutic goal. 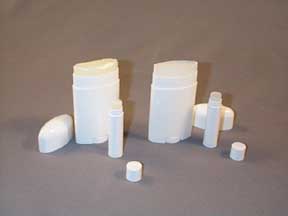 Sticks are an easily transportable and convenient dosage form for administering topical medications. They can be compounded in different sizes and shapes for application to different areas of the body. They can be applied directly to the affected site of the body for local activity. Or they can be applied to different epidermal sites if systemic activity is desired. Epidermal penetration enhancers can be added to the formulation to promote this later use. Local anesthetics, sunscreens, oncology drugs, antivirals, and antibiotics have all be administered by medication sticks.

Sticks get their consistency from a combination of waxes, polymers, resins, and in some cases from drug solids fused into a firm mass. Waxes, polymers, oils, and gels (or combinations of these) that will soften at body temperature and allow the formulation to be evenly spread over the affected area are called soft sticks. These sticks are either clear or opaque depending on the base used in the formulation. When applied to the skin, they leave no visible residue. Soft clear sticks contain sodium stearate, glycerin, and/or propylene glycol in their base. Soft opaque stick bases may contain petrolatum, cocoa butter, and polyethylene glycol (PEG).

Hard sticks are made of crystalline powders that are either fused together by heat or held together with a binder. The stick must be moistened to be “activated.” When it is wetted, a concentrated solution of the drug forms on the wetted part of the stick and the solution is transferred when the stick is touched to the affected area. The crystalline powder in the stick may leave a white residue on the skin. The prime example of a hard stick is a styptic pencil.

Additional substances used in stick bases include paraffin, castor oil, corn oil, cottonseed oil, oleic oil, peanut oil, soybean oil, and PEG 300 and 400. Adding lubricants will minimize the coherence of the waxes and improve spreadability. Vitamins A and E can be added to enhance emollient and skin care effects. Zinc oxide and p-amino benzoic acid (PABA) could be added to the stick as sun blocks.