Inhalation dosage forms are intended to deliver drugs to the lungs. The lungs have a large surface area and a rich blood supply to the alveolar epithelium both of which favor rapid absorption. However, there is considerable variability in the absorption of drugs from the lungs so that this route is not considered an alternative to intravenous administration. Drugs administered via this route are to affect pulmonary function or treat allergic symptoms. Examples of drugs administered by inhalation include adrenocorticoid steroids (e.g., beclomethasone), bronchodilators (e.g., isoproterenol, metaproterenol, albuterol), and antiallergics (e.g., cromolyn).

Administrating drugs via this route is dependent on factors which involve the formulation, the administration device, and the anatomy of the lungs.

Inhalation formulations are generally solutions, suspensions, and powders. These formulations are administered via an aerosol or a dry powder inhaler. Aerosols are devices where liquid or suspension droplets are the internal phase and a gas is the external phase. Commercial aerosols are typically metered dose inhalers (MDI) that deliver a fixed dose in a spray with each actuation of the device. For compounded inhalation solutions, atomizers, nebulizers, and vaporizers are the aerosol devices.

Atomizers (right) are devices that break up a liquid into a aerosol. A squeeze bulb is used to blow air into the device. The air causes the drug solution to rise in a small dip tube and vaporizes the liquid in the air stream. To produce even smaller droplets, the air stream is directed into a baffle or bead which breaks the droplets as they collide with the device. The air and liquid then exit the atomizer.

A nebulizer (left) contains an atomizing unit within a chamber. When the rubber bulb is depressed, the medication solutions is drawn up a dip tube and aerosolized by the passing air stream. Baffles or beads may also be present in the chamber. The fine droplets exit the nebulizer. The larger droplets collect on the chamber and fall back into the reservoir where they can be used again.

Vaporizers produce a fine mist of steam. Volatile medication is added to the water in the vaporizer or to a special medication cup present in some models. The medication volatilizes and is inhaled by the patient as they breath.

Commercially available dry powder inhalers contain their dry powders in manufactured cartridges or disks. When the patient administers a dose, the device is first activated by some mechanical motion and the dry powder becomes ready for inspiration. Then the patient inhales through the device mouthpiece and the powder is drawn into the pulmonary tract along with the inspired air. These devices have overcome a major problem of inhalation therapy, synchronizing deep inspiration with the administration of the drug. Some of these devices are Diskhaler®, Turbuhaler®, Diskus®, and Rotahaler®.

Compounded powders are administered with insufflators or puffers. Squeezing the rubber bulb of an insufflator causes a turbulence within the powder reservoir which forces some of the powder into the air stream and out of the device. A puffer is a plastic accordion-shaped container with a spout on one end. The powder is placed inside the container and the puffer is actuated by squeezing the device. A portion of the powder is ejected from the spout. Beside their use in inhalation therapy, insufflators and puffers can be used to apply powdered drugs to the nose, ear, tooth socket, or body surfaces.

Regardless of the formulation or the administration device, inhalation therapy also depends on the coordination, the breathing patterns, and the respiration depth of the patient at the time of administration. Inhalation devices produce either liquid droplets or powder particles upon actuation. There is a strong correlation between the inspired particle size and its final deposition inside the lungs. Large particles (about 20 microns) impact in the back of the mouth and throat and are eventually swallowed rather than inhaled. Particles from 1 to 10 microns reach the terminal bronchioles and are more available for local therapy. Smaller particles (0.6 micron) penetrate to the alveolar sacs where absorption is most rapid, but retention is minimal since a large fraction of the dose is exhaled. The particles that reach the alveolar sacs and remain there are responsible for providing systemic effects. 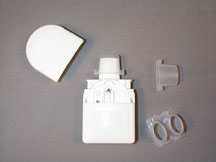 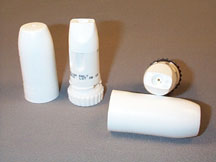 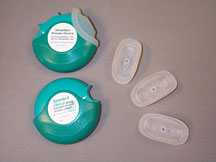 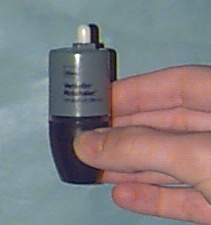