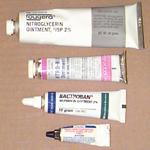 Ointments are used topically for several purposes, e.g., as protectants, antiseptics, emollients, antipruritics, kerotolytics, and astringents. The vehicle or base of an ointment is of prime importance if the finished product is expected to function as any one of the above categories. In the case of a protective ointment, it serves to protect the skin against moisture, air, sun rays and other external factors. It is necessary that the ointment neither penetrates the human skin barriers nor facilitates the absorption of substances through this barrier. An antiseptic ointment is used to destroy or inhibit the growth of bacteria. Frequently bacterial infections are deeply seated; a base which has the capacity to either penetrate or dissolve and release the medication effectively is therefore desired. Ointments used for their emollient effect should be easy to apply, be non-greasy and effectively penetrate the skin.

Dermatological formulations are among the most frequently compounded products because of their wide range of potential uses. These include solutions (i.e., collodions, liniments, aqueous and oleaginous solutions), suspensions and gels, emulsions, lotions, and creams. Lotions can be either suspensions or emulsions but are fluid liquids that are typically used for their lubricating effect. Creams are emulsions and are typically opaque, thick liquids or soft solids used for their emollient properties. Creams also have the added feature that they tend to “vanish” or disappear with rubbing. Distinctions between lotions and creams are open to individual interpretation.

Other dermatological formulations that are not commonly compounded include aerosols, dusting powders, and devices such as transdermal patches, tapes, and gauzes. These formulations are typically manufactured.

This chapter will deal with two other dermatological formulations, ointments and pastes. Pastes have more solid material in them than ointments. These two formulations are also termed “semisolids” because they appear to be solid but still have fluid properties.

Regardless of the formulation, all dermatological formulations are applied to the skin.

The skin is the largest and heaviest organ in the body and accounts for about 17% of a person’s weight. Its major function is to protect the underlying organ systems from trauma, temperature, humidity, harmful penetrations, moisture, radiation, and microorganisms. It is composed of three layers of stratified tissue: epidermis, dermis, and subcutaneous tissue. The thickness of the skin is 3 – 5 millimeters. The thickness of the skin varies with the different parts of the body. The thickest parts of the skin are the palms and soles and the thinnest parts are the eyelids and genitals. Within the structure of the skin are several skin appendages: hair follicles, sebaceous glands, sweat glands, and nails.

In normal skin, the epidermal cells are continually replenished by the formation of initially viable cells from the basal germinative layer. As the new cells develop, they displace the outer epidermal cells. The outer layer is called the stratum corneum and these cells are sloughed off to the environment. As the cells migrate to become the stratum corneum, they become flattened, lose their nuclei, and the organized cell contents becomes replaced with keratin fibrils. The turnover time from germination to sloughing is about 21 days.

Some dermatological formulations are intended to systemically deliver a drug. Percutaneous (through the skin) absorption is the result of three competing processes:

Although the percutaneous absorption of drugs is a complex process, several generalizations are possible:

The major disadvantage of this route of administration is that the amount of drug that can be absorbed will be limited to about 2 mg/day. This may become a significant limitation if the route is being considered for systemic therapy. However, several chemicals have been found that promote the percutaneous absorption of drugs. These “penetration enhancers” improve the solubility of the active drug in the stratum corneum and facilite the diffusion of the drug through this barrier into the systemic circulation. Below is a list of penetration enhancers used in dermatological formulations. (reference 1) Other commonly used enhancers include DMSO (dimethyl sulfoxide), urea, and triethanolamide.

There are five (5) classes or types of ointment bases which are differentiated on the basis of their physical composition. These are:

Each ointment base type has different physical characteristics and therapeutic uses based upon the nature of its components. The following table summarizes the composition, properties, and common uses of each of the five types. For more information consult Remington’s.

*Varies depending upon specific content of the ointment base and the relative polarity of the drug(s) incorporated. This table refers more generally to the release of a typical nonelectrolyte (primarily lipophilic) drug.

Prepare 120 g of each of the following five ointments on a w/w basis. One partner should prepare bases #1, 3 and 5 while the other prepares #2 and 4. Make sure that you follow closely the procedures for preparation.

BASE NO. I: Oleaginous Base (White Ointment)

BASE NO. II: Absorption Base

BASE NO. III: W/O Emulsion Base (Cold Cream type base)

BASE NO. IV: O/W Emulsion Base (Hydrophilic Ointment)

BASE NO. V: Water Soluble Base

How To Pack An Ointment Jar

View a video demonstration on how to pack an ointment jar

View a video demonstration on how to seal an ointment tube

An ointment slab (left) and large metal spatulas should be used for this process. Ointment slabs are either ground glass plates or porcelain and provide a hard, nonabsorbable surface for mixing.

Ointment pads (right) have the advantage that “clean-up” is quicker, but the ointment can soak into the parchment paper. Further, the paper can absorb liquids and may tear when using sticky or thick ointments. Large metal spatulas are used instead of smaller metal spatulas because they have the proper combination of flexibility and strength for adequate shearing and mixing. Black rubber or plastic spatulas are not used in ointment compounding.

If preparing a large quantity of ointment, a mixing device of some type might be used instead of the ointment slab and spatula. Two options are an ointment mill, and an “electric mortar and pestle.” Ointment mills produce very smooth and elegant ointments. The electric mortar and pestle allows the formulation of the ointment and the dispensing of the formulation to be done in the same container. (Photos courtesy of Professional Compounding Centers of America, Inc., Houston, Texas)

View a video demonstration on levigating a powder

Incorporating a Drug into an Ointment

View a video demonstration on incorporating a drug into an ointment

Soluble drugs can be incorporated into oleaginous bases by fusion. The base is liquefied over low heat (not to exceed 70°C) and then the drug is added to the molten base. The mixture is then allowed to cool with occasional stirring.

An absorption base is an oleaginous base that contains a w/o emulsifying agent. When water is taken up into the base, it will form a w/o emulsion. Absorption bases typically can incorporate about 50% of their volume in water.

Water soluble ingredients can be added to the water phase of the w/o emulsion. If the drug will dissolve in a small amount of water, the aqueous solution can be added directly to the base using a pill tile and spatula. If a larger quantity of water is needed to solubilize the drug or if an aqueous solution is being added to the base, heat may be needed to compound the formulation. It may be necessary to add additional emulsifier to the emulsion to accommodate the added water. Some commercial emulsions do have the necessary excess emulsifier.

The same comments that apply to incorporating water soluble ingredients into absorption bases also apply to w/o emulsion bases.

Water soluble powders can be directly incorporated into the external phase using a pill tile and spatula. If the powder is insoluble, the levigating agent should be water miscible so glycerin, propylene glycol, polyethylene glycol (PEG) 300 or 400, or alcohol would be acceptable. If the insoluble substance has a different salt form that is aqueous soluble, consideration should be given to using that salt form.

It may be more difficult to incorporate oil soluble ingredients into the o/w formulation. A small amount of oil can be incorporated into the base if there is excess emulsifier. Some commercial products do have the necessary excess emulsifier. If a larger portion of oil is to be added, the addition of more emulsifier may be necessary. If heat is used to incorporate the oil, it is important to work quickly so that water is not evaporated from the product. This will cause the product to become stiff and waxy.

Water soluble drugs can be dissolved in a small quantity of water and incorporated using a pill tile and spatula. Insoluble powders will require a water miscible levigating agent such as glycerin, propylene glycol, or polyethylene glycol 400. Oils can be added into these bases by first mixing the oil with glycerin or propylene glycol, and then incorporating the mixture into the base. Heat may be necessary if the quantity of liquid to add to the base is large.