Gels are an excellent formulation for several routes of administration. They are useful as liquid formulations in oral, topical, vaginal, and rectal administration. Gels can be clear formulations when all of the particles completely dissolve in the dispersing medium. But this doesn’t occur in all gels, and some are, therefore, turbid. Clear gels are preferred by patients.

There are many gelling agents. Some of the common ones are acacia, alginic acid, bentonite, Carbopols (now known as carbomers), carboxymethyl cellulose, ethylcellulose, gelatin, hydroxyethyl cellulose, hydroxypropyl cellulose, magnesium aluminum silicate (Veegum), methylcellulose, poloxamers (Pluronics), polyvinyl alcohol, sodium alginate, tragacanth, and xanthan gum. Though each gelling agent has some unique properties, there are some generalizations that can be made:

Carbomer is a generic name for a family of polymers known as Carbopol. Carbopols were first used in the mid 1950s. As a group, they are dry powders, which have high bulk densities and form acidic aqueous solutions(pH around 3.0). They thicken at higher pHs (around 5 or 6). They will also swell in aqueous solution of that pH to as much as 1000 times their original volume. Their solutions range in viscosity from 0 to 80,000 centipoise (cps). Some examples of this group of gelling agents are:

Carbomer polymers are best introduced into water by slowly sprinkling a sieved powder into the vortex created by rapid stirring. This should prevent clumping. Once all of the powder has been added, the stirring speed should be reduced to decrease the possibility of entrapping air bubbles in the formulation.

As mentioned, when the carbomer is dispersed, the solution will have a low pH. A neutralizer is added to increase the pH and cause the dispersion to thicken and gel. Some neutralizing agents are sodium hydroxide, potassium hydroxide, and triethanolamine. If inorganic bases are used to neutralize the solution, a stable water soluble gel is formed. If triethanolamine is used, the gel can tolerate high alcohol concentrations. The viscosity of the gel can be further manipulated by propylene glycol and glycerin (to increase viscosity) or by adding electrolytes (to decrease viscosity).

Poloxamer (Pluronics) are copolymers of polyoxyethylene and polyoxypropylene. They will form thermoreversible gels in concentration ranging from 15% to 50%. This means they are liquids at cool (refrigerator) temperature, but are gels at room or body temperature. Poloxamer copolymers are white, waxy granules that form clear liquids when dispersed in cold water or cooled to 0-10°C overnight.

Pluronic F-127 is often combined with a lecithin and isopropyl palmitate solution to make what is called a “PLO gel.” This is a slight misnomer, since the final product is actually an emulsion. The confusion comes from using a gel as one of the ingredients for the emulsion. 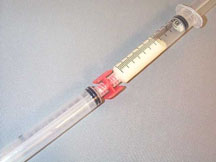 “PLO gel” is made by combining a Pluronic F-127 gel and a lecithin/isopropyl palmitate syrup. The two components are made and stored separately. When it is time to compound a formulation, water soluble drugs are dissolved in the Pluronic gel or oil soluble drugs are dissolved in the lecithin syrup. If a small quantity of formulation is to be made, each of the components can be put into a syringe and the two syringes are connected by a adapter. The mixture is forced between the two syringes and the shear caused by the passing the mixture through the adapter will create the “PLO gel.”

View a video demonstration on making the PLO emulsion.