Is there a difference in regulating veterinary drugs compared to human drugs?

First of all, is there a difference in regulating veterinary drugs compared to human drugs?

Yes! Humans are legally allowed to consume animal tissues and byproducts, except endangered species whereas food-producing animals (we will talk more about this in a bit) are consumed by humans that regulations should ensure the safety and effectiveness of the drugs to treat and to humans.

No! Both human and animal drugs are regulated by Food and Drug Administration (FDA) under Federal Food, Drug, and Cosmetic (FDC) Act.

These two categories of animals are important targets for veterinary drug law and pharmacy practice.

Regulations address the use of veterinary drugs in food-producing animals and the nature of the drug being administered.

As of November 2019, FDA has issued draft Guidance for “Compounding Animal Drugs from Bulk Drug Substances”. If finalized, this would allow drug compounding from bulk substances for food-producing animal patients. For now, It is not allowed.

What is a pharmacist’s job? Pharmacists should be aware of the intended use of the animal patient and follow all regulations and guidance when dispensing drugs to food-producing animal patients.

What is a pharmacist’s job? Expected to be vigilant in preventing drug abuse by the caregivers for animal athletes.

Because of the unique situation of having non-human patients, there is the veterinarian-client-patient relationship.

Let’s switch gears and talk about how veterinary drug laws have evolved. 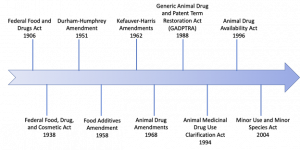 Categories of drugs used in animals

Now we know the law, let’s take a look at what are the drugs that are under these regulations.

Categories of drugs used in animals

US Department of Agriculture (USDA)

**Pharmacists that are certified for administering immunization are only certified to immunize humans! The certification doesn’t extend to animal patients!